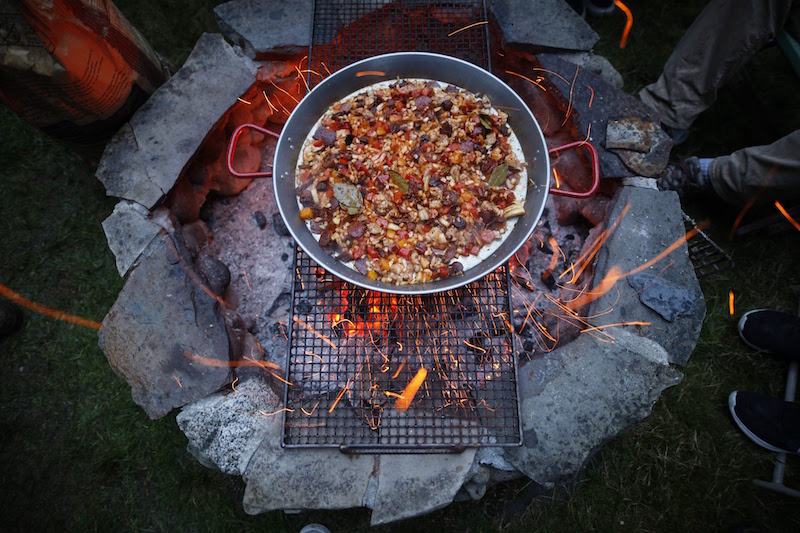 Ever since we had paella at Jim German Bar in Waitsberg for Conner’s 30th birthday, we’ve been craving a repeat experience. Jim German Bar had a wall of paella pans for different sized parties. We had around 30 people and they cooked the paella on a dedicated propane paella burner. The flavors were deep and exotic–we think their chorizo was their secret ingredient.

We’ve made paella several times in a 13” Paella pan (you measure the top rim diameter) following a recipe from Whole Foods and it turned out great–not quite as good as our experience in Waitsberg but a memorable meal nonetheless.

Our small pan feeds around 6 people with normal portions, but we wanted to step it up a notch for Lia’s 31st birthday. We bought a 22” paella pan which is said to serve 16 people. The pan is so large it doesn’t fit in our sink let alone our stove. I have a Bayou Classic Banjo Burner, but it also doesn’t come close to being big enough, so instead we planned to cook on the fire.

We built a brick tripod in the fire pit to balance the paella on, but the fire was too hot so we put our pan on the grate that spanned the firepit rim, about 8” above the fire. However, the tripod was effective to corral the coals to a better hight. Unfortunately, the paella was still to high and not hot enough. We had trouble browning the chicken and so we tried adding charcoal and blowing on the fire. Of course, then it started dumping rain.

Fortunately, the rain let up after 15 minutes. The fire wasn’t hot enough, so we ended up boiling the broth separately, but then we learned that kindling makes the temperature go up REAL fast. We used this at the wrong time, so our liquid boiled off two quick. We ended up adding the better part of two bottles of white wine.

In the end, it came out great. To our surprise, 14 people finished off the big paella, and only a small amount of the vegetarian paella was left over. We also ate 1.5 loaves of bread, a slab pie, and copious wine. It was a great success; one that definitely rivaled our experience in Waitsberg. 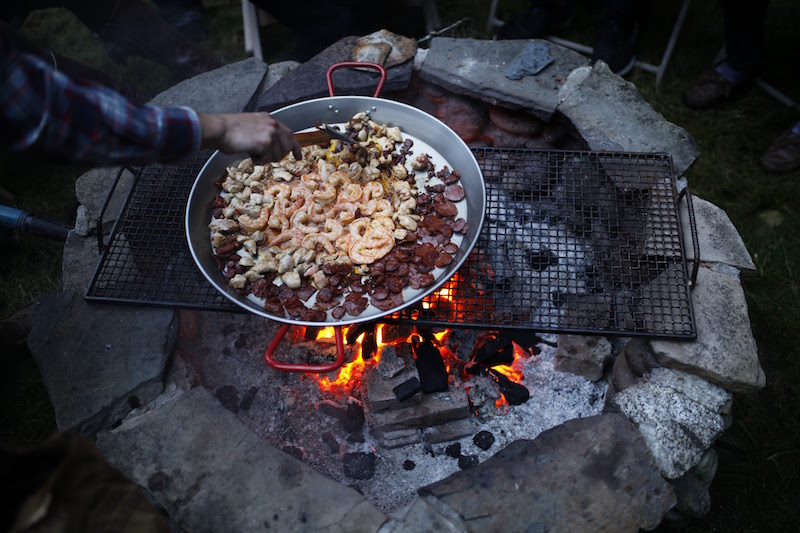